The Wheel of Time Wiki
Register
Don't have an account?
Sign In
Advertisement
in: Characters, Male characters, Andoran characters,
and 2 more

Thomdril "Thom" Merrilin is a character in The Wheel of Time portrayed by Alexandre Willaume. He meets Rand al'Thor and Mat Cauthon at an inn while they are looking for their friends.

Thom Merrilin was born and raised in Caemlyn, the capital city of Andor. His family was very wealthy, and he received a high level of education in Andoran politics. After decades of schooling, he became a court bard for House Trakand, the royal family of Andor, and was known as "The Gray Fox."[1]

Thom was close to his nephew, Owyn, and spent a lot of time getting him out of trouble. He noticed that Owyn was turning sour on people, and one day, Owyn channeled the One Power. When Thom was away, Owyn was found by the Aes Sedai of the Red Ajah, and was gentled. Owyn fell into a deep depression from being cut off from the One Power, and committed suicide.[2]

For reasons unknown, Thom left the capital to become a traveling gleeman. He hustled from dingy inn to overgrown amphitheater, entertaining the working people of Andor. He never used his power for favors, nor advertised his past.[3]

He became friends with Basel Gill, who ran the Light's Blessing Inn in Tar Valon.[4]

Thom is new in the town of Breen's Spring, and performs at the Four Kings Inn. When Rand and Mat enter, Thom performs a somber song. After he finishes, Thom goes around the inn, asking patrons for tips. A man bumps into Mat, and then into Thom. When Thom gets to Rand and Mat, Mat declines, saying they're "too depressed for charity". When Mat tries to pay for his stew, he realizes his coin purse was taken. Thom pulls out Mat's purse, indicating that the man who bumped into Mat earlier had taken it, and he tells Mat that they can't trust anyone, before pocketing it for himself.

Mat later goes out to the dead Aielman in a cage at the edge of town, and Thom confronts him when he sees the young man approach the corpse. When Thom asks Mat what he is doing, the other man admits he's trying to get home, and was going to see if the Aielman had anything of value. Thom turns away as Mat searches the man for his possessions, knowing that everyone has had their low moments, and Mat proceeds to help Thom bury the body in the manner of the Aiel. When they are done, Mat asks for his coin purse back, but when he reaches for it, Mat reveals that he has already pocketed it off Thom.

Back in town, Thom throws a knife through the throat of the innkeeper, Dana, after she reveals that she is a Darkfriend and that she intends to turn them over to the forces of the Shadow. Thom walks up behind her and retrieves his dagger, and advises the boys that they need to leave, asking if they will join him when he heads east.[5]

After leaving Breen's Spring, Thom, Rand, and Mat eventually find themselves on a farm, planning to sleep in the barn for the night without telling anyone. The group is cornered by the farmer, Master Grinwell, though Rand manages to talk the farmer and his wife into letting them stay in exchange for mucking out the stables. Thom leaves the work to Rand and Mat, stating that a gleeman must remain fresh before a performance.

Later, Thom discusses Mat's sour mood with Rand. Thom relates his experience with Owyn to Rand, and speculates that Mat's change in demeanor is likely due to him being a male channeler, and promises to keep Mat away from the Red Ajah. When Rand notes that Thom knows a lot for a simple gleeman, he professes that there is nothing more dangerous than a man who knows the past.

In the night, Rand wakes up, asking where Mat is. Noting that he is missing, Thom and Rand head to the farmhouse, where they find Mat standing over the bodies of the Grinwells. However, they realize that the family was killed by the Fade that Dana had sent after them, and not Mat. Thom tells the young men to run, and personally holds off the Fade.[2]

Thom strikes up a somewhat paternal relationship with both Mat and Rand. When he sees Mat trying to loot the dead Aielman's body, he acknowledges that things have been hard for Mat, but tries to show him a better path. He vows to protect Mat from the Red Ajah when he believes he is a male channeler, and confides in Rand about what happened to his nephew, Owyn.

Thom is a man in his fifties. He wears a "patchwork of color on the inside of his cloak, identifying him as a gleeman." He carries a guitar, which he uses for his performances.[6]

Like most court bards, Thom is a master of High Chant, Plain Chant, and Common Chant. He can walk a rope, juggle, and tumble with grace despite his many years. His oratory often focuses on stories of old, but always with a modern lesson. Despite his days of court being over, his politics are unmissable in his nightly performances.[1] Thom is also a skilled combatant, being able to instantaneously kill Dana with a throwing knife, and is able to personally hold off a Fade.[7] 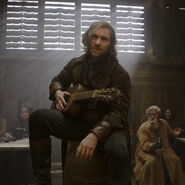 Thom in the Four Kings Inn

Thom, Mat, and Rand on the Grinwell farm

On December 23, 2020, a first look was released of Thom's guitar, including a snippet from the script and the spoken line, "Donation for the gleeman?"[6]

(book spoilers!) from the book series.