The first two episodes had an early premiere in select theatres on November 15, 2021.

The first three episodes premiered on Prime Video on Friday, November 19, with new episodes available each Friday following, leading up to the season finale on December 24.

Official synopsis from Amazon in October 2021:

The lives of five young villagers change forever when a strange and powerful woman arrives, claiming one of them is the child of an ancient prophecy with the power to tip the balance between Light and Dark forever. They must choose whether to trust this stranger – and each other – with the fate of the world before the Dark One breaks out of His prison, and the Last Battle begins.

Official synopsis from a press release by Amazon Studios in July 2021:[3]

Set in a sprawling, epic world where magic exists and only certain women are allowed to access it, the story follows Moiraine (Rosamund Pike), a member of the incredibly powerful all-female organization called the Aes Sedai, as she arrives in the small town of Two Rivers. There, she embarks on a dangerous, world-spanning journey with five young men and women, one of whom is prophesied to be the Dragon Reborn, who will either save or destroy humanity.

Official synopsis first shared by The Hollywood Reporter in October 2018:[4][5][6]

Set in a sprawling world where magic exists but can only be used by women, the story follows Moiraine, a member of the shadowy and influential all-female organization the Aes Sedai, as she embarks on a dangerous journey with five young men and women. Moiraine's interest in these five lies in the fact that she believes one of them might be the reincarnation of an incredibly powerful individual who prophecies say will either save humanity or destroy it. The series draws on numerous elements of European and Asian culture and philosophy, most notably the cyclical nature of time found in Buddhism and Hinduism.

On October 2, 2018, Amazon announced that it had given the production a series order.[4]

It was announced in June 2019 that Rosamund Pike had been cast as the lead in the series.[15] Further main cast members were announced in August 2019: Josha Stradowski as Rand al'Thor, Marcus Rutherford as Perrin Aybara, Zoë Robins as Nynaeve al'Meara, Barney Harris as Mat Cauthon, and Madeleine Madden as Egwene al'Vere.[16]

Principal photography began on September 16, 2019.[18] Filming primarily took place in the Czech Republic, but the series also filmed in Slovenia, Croatia, and Spain.[19][20]

On Tuesday, November 16, 2021, the first episode will be screened as part of a red carpet premiere event in London.

On Monday, November 15, 2021, the first two episodes had "exclusive fan screenings" in select cities in the USA.[26] Many prominent fans attended to officially host these screening events:

On Friday, November 19, 2021, the first three episodes were released on Prime Video. It is available in more than 240 countries and territories worldwide.[3]

The episodes will be released weekly, each Friday following, leading up to the season finale on December 24.

The series is composed by Lorne Balfe, who reached out to get involved with the series. There are about 18 musical themes for the first season. He worked closely with showrunner Rafe Judkins to come up with a distinct sound for the series, to separate it from other fantasy series. It has a very global sound with a variety of instruments, such as a carnyx. The lyrics of the music are in the Old Tongue and narrate the scenes like an opera.[34]

Balfe and the team will release music without initially providing lyrics, to give fans a chance to try to analyze the music. They also plan to release the instrumental versions of the music so fans can add their own vocals, and to release just the vocals so fans can make their own music to go with it.[34]

The first season will have four albums. The first album is a musical introduction for season 1, the characters, and the themes. The following albums will be for every two episodes, for a total of four albums.[34] 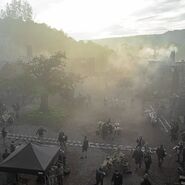 The Wheel Of Time - Behind the Scenes - Prime Video