The Wheel of Time Wiki
Register
Don't have an account?
Sign In
Advertisement
in: Cast, Real people, Main cast,
and 3 more

Rosamund Pike is an English actress who portrays Moiraine Damodred on Prime Video's The Wheel of Time. She also serves as a producer for the show.[1]

On October 21, 2021, it was announced that Pike would narrate the audiobook for The Eye of the World, the first book in The Wheel of Time.[3]

Born on January 27, 1979 in London, England, actress Rosamund Mary Elizabeth Pike is the only child of a classical violinist mother, Caroline (Friend), and an opera singer father, Julian Pike. Due to her parents' work, she spent her early childhood traveling around Europe. Pike attended Badminton School in Bristol, England and began acting at the National Youth Theatre. While appearing in a National Youth Theatre production of "Romeo and Juliet", she was first spotted and signed by an agent, although she continued her education at Wadham College, Oxford, where she read English Literature, eventually graduating with an upper second class honors degree.

Pike is in a long-term relationship with businessman Robie Uniacke, and the couple have two sons together.

On March 17, 2021, Pike stated the following on Instagram with the release of the first-look video of Moiraine:

Wheel of Time fans and future Wheel of Time fans, I am giving you your first exclusive glimpse of Moiraine, woman of mystery, power, calm and strength. Everyone in the Wheel of Time family is excited to show you the full series when it comes to @amazonprimevideo . We love these characters, and it is an honour to have the chance to embody them. Moiraine Sedai is an enigma and a force of nature, never to be underestimated. See a flash of her here, as she embraces the source of the One Power. #blueajah #theonepower @wotonprime #wheeloftime ✨

On October 29, 2021, IGN released an interview with the cast that was done in 2019. Pike said the following on Moiraine:

Moiraine is a woman who you never quite know where you stand with her. It's certainly, in our show, it's designed to keep an audience guessing as to her motives. She's someone you always have to be on your toes with, you always have to be reading her on multiple levels. She's surprisingly warm, although she's feared, so that makes an interesting balance, because there's a lot of talk about Aes Sedai in the world of The Wheel of Time, there are many people who've heard of Aes Sedai and have varying conceptions of what they are. People believe they're monsters, people believe they're to be feared, people believe they're in league with the Dark One, some people believe they're a force for good, and all those rumors abound, and certainly in the Two Rivers, they've never actually met an Aes Sedai, so she's greeted with a lot of suspicion and weariness and awe. And it's her job to disarm. She is a protector, but she's also an avenger, and she has tremendous power. Moiraine has a mission, she's the character who comes into our world with a direct sense of purpose and a mission to accomplish, a mission that's been with her since she was much much younger. It's something many Aes Sedai are trying to accomplish and she is determined to be the one to accomplish it. 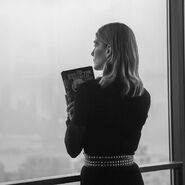 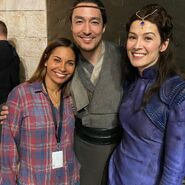 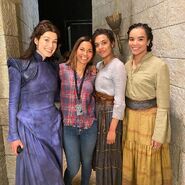 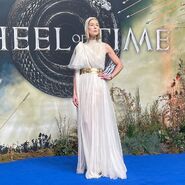 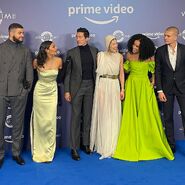 Pike with the main cast for the London premiere on November 15, 2021

Pike with the main cast for the London premiere on November 15, 2021