Rafe Judkins is the showrunner of The Wheel of Time television series.

On April 20, 2017, it was announced that Judkins would be writing and showrunning the television adaptation of The Wheel of Time.[1]

Judkins is dating Taylor Napier, who portrays Maksim in the series.

Judkins has notably interacted positively with The Wheel of Time fans online, both on Twitter and on Instagram. Judkins started a "WoT Wednesday" trend where information was occasionally released on Wednesdays on social media, which later became the first Wednesday of the month.[2] He invites discussion and thoughts from fans about the book series, such as which characters fans would like to cut or keep,[3] fans' favorite rituals, festivals, and ceremonies from the series,[4] and thoughts on The Eye of the World prologue.[5]

When Judkins got a homophobic death threat from a fan, Judkins jokingly stated that he would make the user's favorite characters gay in the series.[11]

"If my job is protect the spine and the heart of what's there, sometimes that is changing things, because sometimes if you did them exactly as they were, a new audience to it wouldn't actually understand the heart of what's there because a lot of it's expressed inside someone's head or it's expressed by a character that gets a POV chapter in a way that we can't really do on television."[12]

"When the books came out they felt so blazingly fresh and different and new, so we want that same thing to be true of the show, and if you see us leaning away from certain elements in the books, often times it's because audiences have now seen them before!"[13]

"What's special about The Eye of the World is the themes of balance, of gender, and the emotional journey of these characters. As a fan of the books, I feel so lucky we get to bring this world to life."[14] 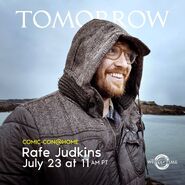 Rafe Judkins as a contestant on Survivor