The Wheel of Time Wiki
Register
Don't have an account?
Sign In
Advertisement
in: Characters, Male characters, Darkfriends,
and 2 more

The Wheel of Time (TV series)

Padan Fain is a character in The Wheel of Time portrayed by Johann Myers.

Padan Fain is the main peddler who frequents the isolated region of the Two Rivers, trading items and delivering news from the outside world.

Padan Fain was born in Murandy.[1] At some point, Fain became a Darkfriend, and pledged his soul to the Shadow. He made a living as a peddler, and regularly frequented the Two Rivers, as the Dark One was drawn to the extraordinary presence of five ta'veren in Emond's Field: Rand al'Thor, Mat Cauthon, Perrin Aybara, Egwene al'Vere, and Nynaeve al'Meara.[2]

Over the years, Fain became well known in the Two Rivers as a main source of information and trade with the rest of the world. During his regular visits to the region, he came to regard Mat as his "best and poorest customer."[3]

On the morning of Bel Tine, Padan Fain arrives in Emond's Field. He whistles as he drives his wagon, and he laughs as he's greeted by many excited children asking for sweets. He sets up shop near the Winespring Inn, and is approached by Mat, who Fain jokes is his "best and poorest customer." Mat offers him Danya's bracelet as a trade. They negotiate, with Fain claiming it's fake gold, and when Mat counters, Fain asks if he'll be able to sell the bracelet in town, indicating that he knows Mat has likely stolen the bracelet. The two haggle briefly, but Padan Fain settles on half a mark, and directly gives Mat three lanterns for the Bel Tine celebration in exchange for the bracelet. Mat begrudgingly accepts and calls him a bastard. That night, Padan Fain is still in town when the dancing begins outside the Winespring Inn. When Shadowspawn begin to attack the village, he quietly departs.[3]

In Tar Valon, Fain sees Mat and Rand enter the Light's Blessing Inn. Later, while Mat is sitting on a balcony to watch the procession of the Aes Sedai and Logain Ablar, Fain laughs when he sees him and slips away.[4]

Fain follows Moiraine and the party through the Ways from Tar Valon to Fal Dara. He is briefly seen at the time a Trolloc attacks Egwene and Rand, and he later emerges from the Waygate and heads to Fal Dara. Perrin Aybara spots Padan Fain walking through the city, and tells Nynaeve al'Meara that he saw him, but Nynaeve is sure that Padan Fain is dead, as he was in the Two Rivers during the attack on Bel Tine.[5]

While a Shadowspawn army attacks Tarwin's Gap, Fain strikes at the palace in Fal Dara. Fain speaks the passcode to the keep, getting the guardswomen to open the entrance, and his Fades behead the guardswomen. Fain and the Fades enter the palace and attack Uno Nomesta, Lord Yakota, and Loial as they are retrieving the Horn of Valere, and Fain stabs Loial with a ruby-hilted dagger. Perrin confronts Fain but doesn't attack, and Fain tells Perrin that he's been visiting the Two Rivers for years to watch Perrin and the other ta'veren for the Dark One. Fain and leaves with the Fades and the Horn of Valere.[2]

Although Fain doesn't directly appear in episode 2, his whistling is heard in Shadar Logoth. 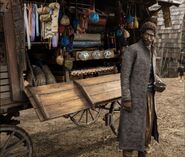 Padan Fain lurking in The Ways

(book spoilers!) from the book series.