The Wheel of Time Wiki
Register
Don't have an account?
Sign In
Advertisement
in: Characters, Female characters, Andoran characters,
and 2 more

Owner of the Four Kings Inn

Friends of the Dark

The Wheel of Time (TV series)

Stabbed in the throat by Thom Merrilin

Dana is a character in The Wheel of Time television series portrayed by Izuka Hoyle. Dana runs the Four Kings Inn in Breen's Spring where Rand al'Thor and Mat Cauthon go to eat and find a place to stay for the night.

Dana was born and raised in the mining village of Breen's Spring in the east of Andor. Growing up, she began to dislike living in a town where everyone had known her all her life, and wished to travel the wider world. She eventually took over the Four Kings Inn as its innkeeper.

At some point, Dana pledged her soul to the Shadow and became a Darkfriend. She believed that the Dark One's victory would be an opportunity to break the Wheel of Time once and for all, and end the suffering she constantly saw. She was sent dreams about Rand al'Thor, Mat Cauthon, Perrin Aybara, Egwene al'Vere, and Nynaeve al'Meara, anticipating to capture one of them as the potential Dragon Reborn.[1]

Rand and Mat enter the Four Kings Inn and order stew, asking Dana if she has seen anyone matching Perrin and Egwene's descriptions, but she responds in the negative, telling them the only other new person in town in the gleeman Thom Merrilin. The gleeman proceeds to perform a somber song, and Dana breaks the mood afterward by asking her patrons if they want to cry, or would rather have another round of song. She brings out stew for Rand and Mat, and a drink for Thom. Thom tries to bait the boys into singing, but she tells them not to try it, joking that they will end up in the lake.

Rand and Mat ask her for a place to stay for the night, and she puts them to work chopping wood. Tired of chopping wood, Mat seeks to find something else to do, and she has him wait tables.

Dana later checks on Rand, and tells him she let Mat off work an hour earlier, and thought Mat would help him. She lets Rand off work. He asks if it would be okay for him and Mat to sleep outside, but instead, she shows him to a comfortable room, and lets him have a round of free drinks for his hard work.

With Mat out in the village, she and Rand drink together, and they begin to chat. Dana tries to kiss him, but Rand pulls away. Dana then locks the door, and asks if she was trying too hard by braiding her hair like Egwene, revealing that her knowledge is more than it might appear. Rand tries to flee, but Dana pulls his heron-mark sword on him. She reveals that she's aware of him and his friends, and tells him to wait for Mat's return by holding the blade at his throat.

Though Dana tells Rand he cannot attempt to escape from the room that is barred by a locked ironwood door, Rand breaks down the entryway by channeling, and runs to find Mat.[2] Dana maniacally runs after them through town until she catches up to the two youths. She tells them that she has been seeing the two and their three other friends from Emond's Field in her dreams. When they ask if she will kill them, Dana instead tells them that the Dragon is a chance to break the Wheel and end suffering, boasting that she will receive the same glory as Ishamael presently has among followers of the Shadow. However, Thom Merrilin arrives on the scene and throws a knife through her throat, killing her instantly.[1]

Dana is a young woman, presumably around Rand and Mat's age of about 20. She has light brown skin, brown eyes, and black hair that she wears in a bun, though later braids her hair to look like Egwene.

Dana's overall combat ability is unknown but she apparently had some weapon training as she was able to defeat Rand rather quickly using a dagger and a sword, though she was killed by Thom throwing a knife through her throat.

Dana appears in the following episodes:

The Wheel keeps turning, and people keep hurting. Every man who comes to this shite town has a story. Flood, drought, war, sisters murdering their brothers, children killing their parents. But the Dragon... the Dragon has a chance to change all that. Break the Wheel. Make it stop.

Dana to Rand and Mat. 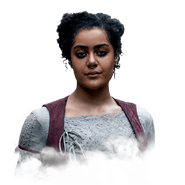 Dana is an original character to the television series and does not appear in the book series. She serves a similar role to Mili Skane

(book spoilers!), in that she's a Darkfriend who attacks Rand and Mat after they've been separated from the group after Shadar Logoth. She can also be compared to other Darkfriends encountered by the pair on the Caemlyn Road, such as Paitr Conel

(book spoilers!) is also similar to Dana, as he owns the inn in Four Kings

(book spoilers!), and while not being a confirmed Darkfriend, he certainly enables a Darkfriend.