The Wheel of Time Wiki
Register
Don't have an account?
Sign In
Advertisement
in: Crew, Real people

Brandon Sanderson is an American fantasy author who is a consulting producer for Prime Video's The Wheel of Time television series.[1]

Following the death of Robert Jordan in 2007, Sanderson was selected to complete The Wheel of Time book series in accordance with the author's wishes. Making use of Jordan's extensive notes, Sanderson completed the final three novels in the series; The Gathering Storm

(book spoilers!), and A Memory of Light

Outside of writing The Wheel of Time, Sanderson is also known as the author of the Cosmere fictional universe, which is the setting of the Mistborn and The Stormlight Archive book series.

Sanderson's involvement in the television series as a consulting producer was confirmed on June 19, 2019.[1] Rafe Judkins has stated that Sanderson reviewed several potential changes to storylines in the show, and Judkins praised Sanderson for his "huge help."[2]

"Number one [thing I told Rafe] was, of course, ‘Matt’s harder to write than he looks.’ I talked about the soul of The Wheel of Time. What makes The Wheel of Time work. I remember talking to him about the interview I heard with Jim, where someone asked him to summarize The Wheel of Time…He eventually said it is what it’s like to be the normal person and be told you need to save the world. To put that burden upon you. That you’ve got to save the world and you’ll probably die doing it. It’s not a burden you wanted, so what do you do with that? "What worked for me, and what anyone has to do who’s in this situation, is read through the books. Feel the books and try to have that in mind when you’re working on it. Anytime I started to get lost, I went back to the books and read what Jim had written, and it pulls me back in."

Brandon Sanderson to Winter is Coming[5]

Brandon Sanderson to Winter is Coming[5]

Sanderson on the set of ep 2 Shadow's Waiting 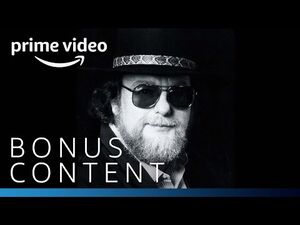 How Robert Jordan Got His Start - The Wheel of Time - Prime Video
December 16, 2021, Sanderson discusses Robert Jordan (starting about 2:55)

Wheel of Time Season One- A Full Discussion—Ep. 34 of Intentionally Blank
January 26, 2022, discusses all of season 1 (starting about 15 minutes)