< A Place of Safety
Edit

A Place of Safety

This is a gallery for A Place of Safety, season 1 episode 3 of The Wheel of Time.

These are official episodic stills released by Amazon Studios for promotion of the episode.

In a flashback to her abduction during the battle on Bel Tine in the Two Rivers, Nynaeve al'Meara hides from a trolloc at the sacred pools.

Nynaeve at the pools

Rand al'Thor and Mat Cauthon travel up a mountain and down into Breen's Spring where they find an Aiel in a cage, the gleeman Thom Merrilin, and the barmaid Dana.

Mat and Rand on a mountain

Mat and Rand on a mountain

Mat outside an Aiel in a cage

Thom at the Four Kings Inn

After being chased by wolves, Perrin Aybara and Egwene al'Vere's journey through the Caralain Grass to the Tuatha'an wagons, where they meet Ila, Raen, and Aram.

Ila, Raen, Perrin, Egwene, and Aram with the Tuatha'an

Lan tries to save Moiraine with Nynaeve's help, which leads them to Liandrin and the Aes Sedai who have captured Logain Ablar.

Moiraine, Lan, and Nynaeve on horseback

These are official behind the scenes images released by Amazon Studios for promotion of the episode. 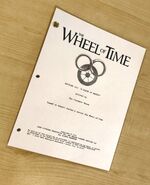 These are official concept art images released by Amazon Studios for promotion of the episode.